A lot of names get omitted from final end credits. Make sure yours isn't one of them.

This week we teamed up with producer and analyst Stephen Follows to look at an interesting question: who gets included, and excluded, in the final end credits of a movie?

Stephen started by analyzing the number of IMDb entries tagged as “uncredited”. Right away, the numbers jumped out at us: 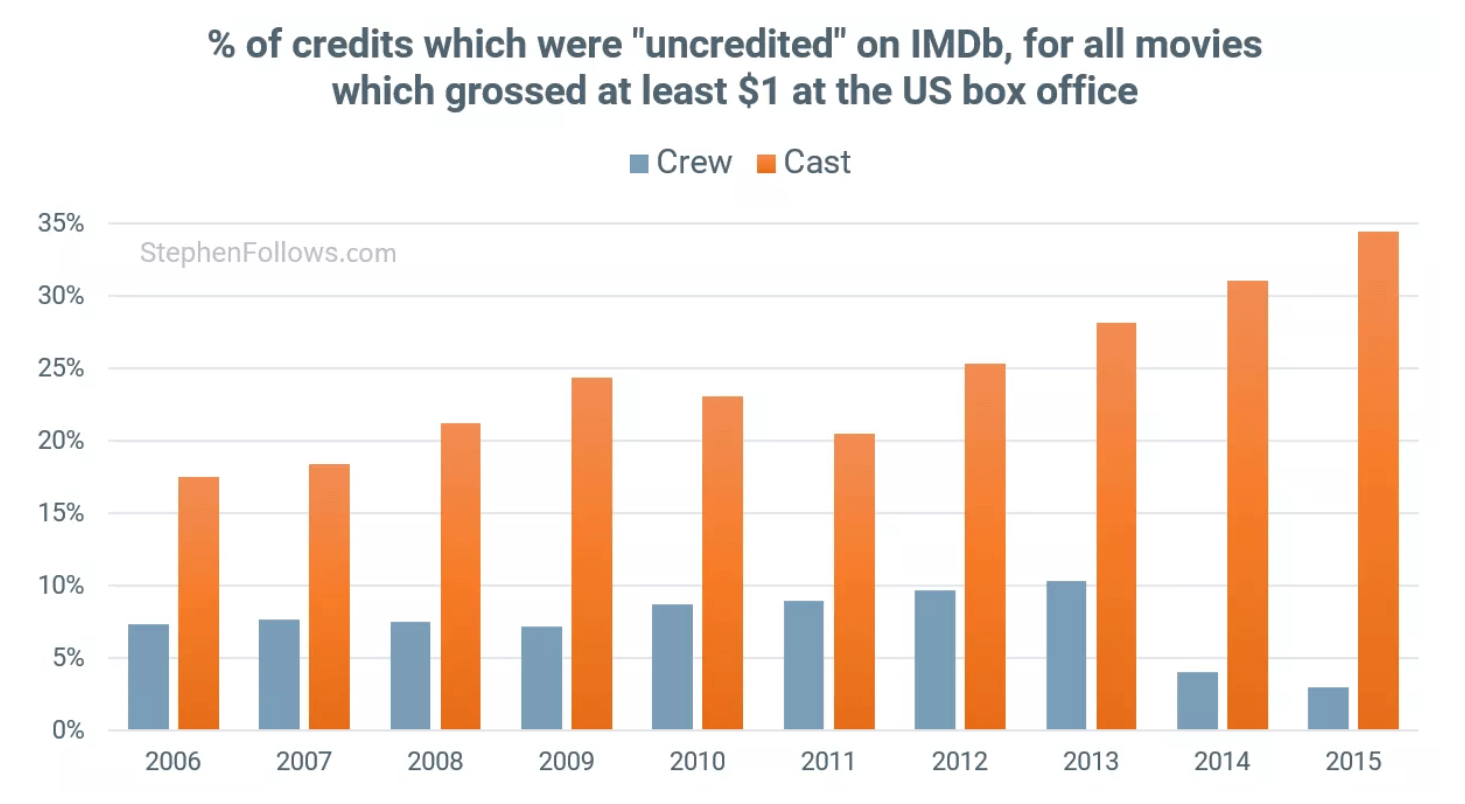 When I reached out to colleagues about this topic, there was no shortage of horror stories: from news companies that refuse to credit any assistant editors, to TV shows and Oscar nominees that had cut their colorists out altogether. (Guys: respect your colorists.) Below, we unpack this issue and explain how to avoid becoming another “uncredited” statistic.

And if you don’t know Stephen Follows—think of him as the Nate Silver of the film industry. We strongly encourage you to check out his site, and his “Uncredited Credits” article that is a companion piece to this one.

We’ve come a long way from “The Wizard of Oz” (1939), whose end titles featured a whopping eleven names, one of them a dog. It’s not just blockbuster movies, either: ask us some time about the one that thanked all 10,003 donors by name.

Witness the giant, horsey text of 1980s and 90s actions movies alongside their contemporary peers. Here’s a snapshot of three decades:

Some unions and guilds have explicit rules governing on-screen credits. These generally affect above-the-line and key crew positions. The DGA, for example, spells out specific requirements around the Unit Production Manager, as well as First and Second Assistant Director positions.

But these are the exception. Below the line, virtually everything is a courtesy—common practice, but a courtesy nonetheless. Digital Imaging Technicians (DITs) report that “Every start work packet makes it very clear that on-screen credit is at the producer’s discretion”. Considering that the DIT is a fairly critical on-set role, most other crew positions can hardly expect to fare better.

Why should a Production Office PA receive a credit, but not a Post Production PA?

A common excuse for withholding credit is that there is just “not enough room.”

So we decided to run some numbers against that claim.

Quick background: Endcrawl has thousands of active projects, and nearly a thousand completed feature film projects. We can confidently state that our service has created more end credits sequences than any other single company has over that past several years. And there are no more than a handful of companies that have made more than we have, in total, during their entire existence.

So our data set is pretty solid.

18 is low number. Looking back at the above side-by-side examples: FACE/OFF is displaying 13 names, 300 shows 22, and Deadpool packs 34 names on the same surface area. Apart from bumping down font size, there are many other ways to maximize your canvas. Here’s a simple tightening exercise: 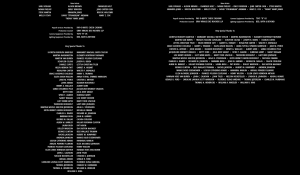 On the right: same content, less than half the height.

The real estate is there, if you want to use it.

5. People are often forgotten, not jilted.

If you’ve ever been left out of the credits, more likely than not someone simply forgot.

There are ways around this. Too often end titles sequences are built in last-moment, dog-ate-my-homework cram sessions. So some of our customers have started building their end credits during pre-production. This saves a world of hurt later on.

(And since Endcrawl charges flat rates per project, you’re free to build your end credits over the course of months or even years, if you like.)

Vendors can be more pro-active as well. When I was running a post production boutique, I always, always, submitted a full list of names to my clients—down to the last post PA, intern, and third-shift digital lab assistant.

We didn’t always get “yes” for an answer. But we always tried.

6. Ask and you shall receive.

So how can you make sure you don’t get left out? In a word: ask.

Talk to your department key.

In many cases, the department keys are responsible for submitting final crew lists for credits. If you’re concerned that you might have been overlooked, start here. Any key worth their salt will want their entire crew to be properly acknowledged.

Talk to your employer.

If you work for a post house, the same principle applies. We conducted an extremely non-scientific poll, and found that it is not common practice to submit comprehensive post credits to clients. That should change. If you’re a post production worker: speak to your employer about this. Tell them I sent you.

If you still feel that you’ve been forgotten, consider reaching out to the post post production supervisor directly. They are commonly the last gatekeeper of the credits. Some caveats: keep it courteous and short. Contact them once, and once only. Post supers are some of the hardest-working souls in the business. Between the renders and the politics, they already have enough on their plate.

If you’ve hit a wall everywhere else, you can still submit directly to IMDb. When I ran a post house, we tasked some of our employees with regularly updating everyone’s IMDb list. It was a small, but meaningful, way to show our employees respect and gratitude.

But if nothing else, you have to grab these reins yourself. Your IMDb page is not the last word on your career. But it is an important public record. Own it.

Bottom line: producers can credit you if they want to; and you can be more pro-active about controlling your c.v.

We’d love to hear about your experiences, good or bad, in the comments.

Off the Shelf: ‘Art of Darkness’

Why Film has not been Disrupted Yet, Part 1

The Difference Between a Font and a Typeface

A lot of names get omitted from final end credits. Make sure yours isn't one of them.