Dear post houses: we need to talk. You're stepping on my picture. 1152p is not a thing.

If you are doing your final post finishing in 2048×1152, you are actually hurting your picture, and you should stop at once. Here’s why.

Juggling your post finishing rasters has always been a mild pain. To wit:

Did you notice anything there?

But wait, it gets worse. Putting that extra 14% of spatial resolution into your DI can actually damage the picture that your audience sees. Why? Because your fancy, non-standard 1152 lines of resolution will have to be scaled down to 1080 lines of resolution. But that’s not a big deal, right? You just press the magic resize button, and there’s no penalty, right?

It’s become conventional wisdom that oversampling is a good thing. Shoot 4k or 5k, finish in 2k or HD. No problem. I happen to agree with that, and Charles Poynton made an eloquent, 5-hour long argument to that effect at a recent talk at the HPA retreat.

“Resampling an image works well for large factors. A small factor like 2048/1920 is difficult to achieve as you basically need a very very large filter kernel to effectively remove just the frequencies you don’t want. In other words, the reject band (1920>2048) is very narrow as compared to the size of the image. That doesn’t give much room for any filtering to work in.”

You (or your client) may have thought that you were finishing in “better resolution” by “going 2k”. But since you have to down-res all deliverables—you know, the thing that your audience will actually see—that higher resolution is not only thrown away, but contributes to an inferior final picture.

[UPDATE: Graeme Nattress writes, “what will happen is necessarily softening, but aliasing because the downsampling filter, if inadequate, will let through aliasing artifacts.” Thanks Graeme.]

Canary In the Coal Mine

Scrolling credits turn out to be the canary in the coal mine here, because they can look really, really bad when you resize them by a small factor. They are very unforgiving. Our slate tries to point this out as politely as possible: 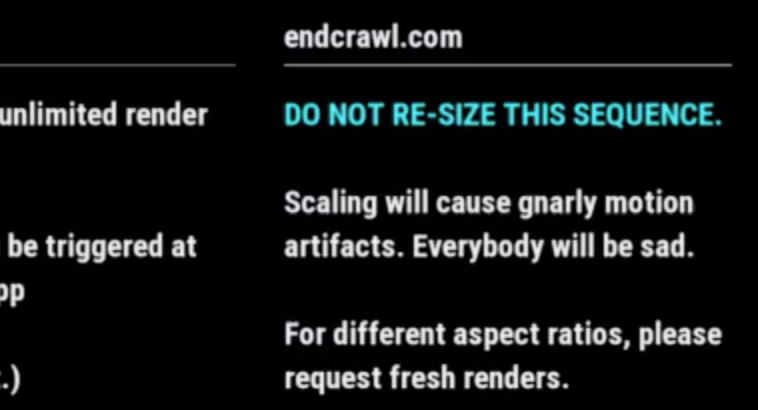 (Endcrawl solves the problem by giving you unlimited renders in all aspect ratios, so you can kick out a native, shimmer-free version for each individual deliverable.)

(Of course, that doesn’t help if someone is still resizing your render after the fact.)

But janky-looking end credits actually just illuminate a deeper problem in your overall post workflow: it makes exactly zero sense to finish in 2048×1152.

For UHD/4k, just double all of those numbers.

But don’t finish in 2048×1152. It yields no benefit and can only serve to step on your final picture.

Unfortunately, this bad trend actually looks to be on uptick. It doesn’t help that ARRI recently introduced a 2048×1152 ProRes recording mode on their Alexa camera. Don’t blame ARRI though. There are legitimate reasons for shooting 2048×1152, but those legit reasons all have to do with cropping your final output. (E.g. it’s good kung fu to shoot ARRI ProRes 2048×1152 and crop for a 2048×858 finish.)

7 Ways to Make Your Own Luck in the Film Industry