In the film industry, you have two things: Development and Distribution. Everything else is just process.

“Pliny. Pliny. Look. There’s two things: Development and Distribution. Everything in between is just process.”

It was Supersphere CEO Lucas Wilson who said this to me, more or less verbatim, several years ago. We were enjoying a dessert of shaved milk ice in Sawtelle and the conversation had turned, predictably, to disruption in the film industry.

Lucas’ words were dead-on. He was expressing two ideas here. First, he was describing the way that the old media film industry does (and does not) work.

But more importantly, he was describing a smiling curve. And the smiling curve is critical in understanding both how films are made today, and where the industry is most vulnerable.

The Smiling Curve in Tech

The concept of the smiling curve was first proposed by Acer co-founder Stan Shih. The idea is straightforward: when looking at his entire production chain, Shih observed: 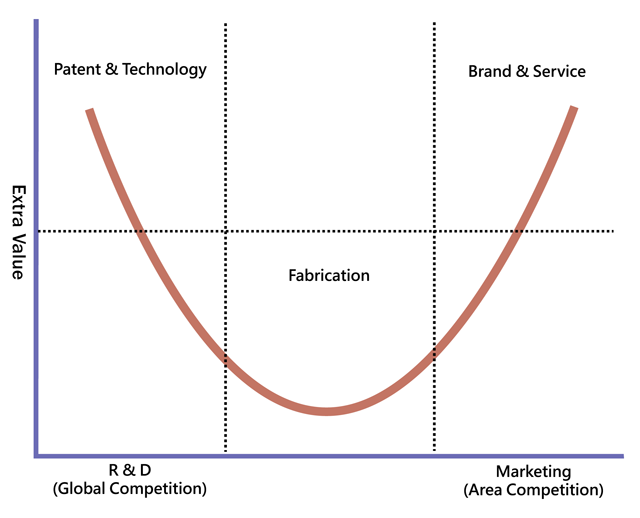 The left side of the smiling curve requires design talent, R&D budgets, and time. The right side needs established sales and distribution channels and large marketing budgets. In other words, both the left and right ends have big moats. That means fewer players—and higher margins.

The middle of the smiling curve, by comparison, has lower barriers to entry. But it also has far less opportunity for differentiation. “Manufacturing” skills are simply easier to acquire. As Samsung has learned repeatedly, being a mere component supplier is your one-way ticket to commodification. And breaking out of the gravity well is no small trick.

This dynamic should be familiar to any Apple customer: we know that both design/R&D (left side) and sales/marketing (right side) are based in Cupertino. That is the heart of what Apple does. Manufacturing, meanwhile, is safely outsourced to Asia.

7/ Those co’s sit at the bottom of a smiling curve with "development" (packaging, financing) to the left, and sales/distro to the right.

The Smiling Curve in Film Production

Film studios and television networks behave in much the same way. In fact, their pipelines closely mimic the waterfall production models of companies that manufacture physical products.

Following the dynamics described above, the “manufacturing” aspect of filmmaking—that is, shooting, editing, VFX, and finishing—are all modularized and outsourced. Kinda like Foxconn. There’s a reason Apple doesn’t insource this work. Just like there’s a reason studios don’t have DPs or writers on their payroll. They don’t need to.

So if you work in production or post, and have ever wondered why economic life feels like a never-ending race to the bottom, here is why: 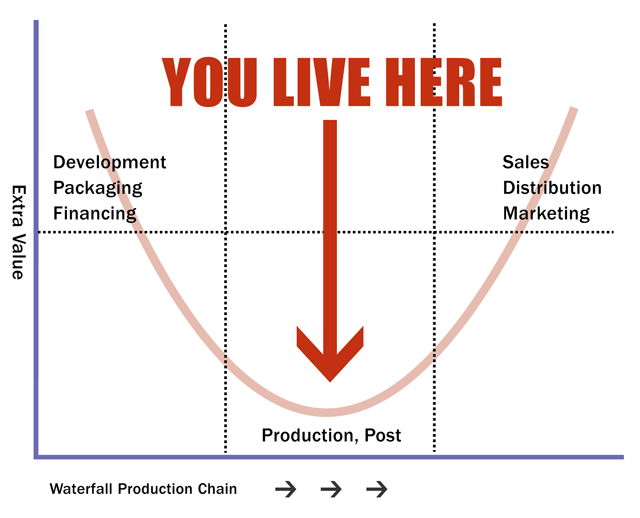 This doesn’t mean that what you do as an artisan has no value. Far from it. But know that your work is priced accordingly.

(As an aside: this has led me to speculate that buying a traditional studio like Disney or Netflix might in fact be an excellent fit for Apple. Like legacy media studios, Apple operates on tightly controlled, high-risk, one-shot waterfall models. The same culture that makes Apple somewhat lousy at developing software services also makes them outstanding at manufacturing physical devices. And that, in turn, could be a strong cultural fit, if the goal is to produce classic waterfall entertainment products like the venerable feature film.)

To be sure, democratizing the tools of “physical manufacture” (shooting, editing, etc.) is important. But we might reasonably conclude that disrupting film and television won’t happen by attacking the bottom of the smiling curve.

That is why I previously noted, for example, that technologists are focusing on all of the wrong areas; and why I made a similar point when proposing that RED Digital Cinema, for all of its brilliance, disrupted the camera industry. But not the film industry itself.

Far more interesting, then, are new companies and challengers who are focused less on “maker tools” and more on the left and right sides of the smiling curve. Let’s call them Left-side Disruptors and Right-side Disruptors. And let’s start paying a lot more attention to them.

In the film industry, you have two things: Development and Distribution. Everything...